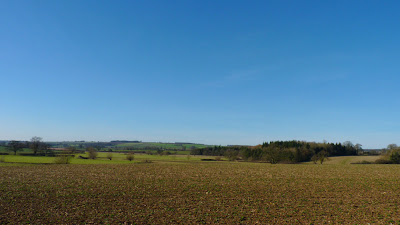 At last spring is upon us and we have had the first really pleasant walk of the year, the sun warm and the breeze mild. The weather was the best thing about tthe day, for we chose to venture to an area of our county which we rarely explore by foot. This flattish, cultivated part of Oxfordshire is frankly a little dull compared to the wilder, rambling curves of Gloucestershire, our usual tramping ground. 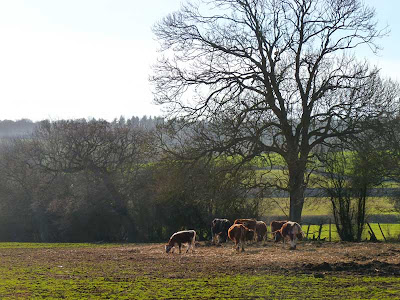 Even a pedestrian landscape could not blot the sheer happiness that blue skies and a kindly sun can inspire. To add interest, we headed across the fields to Spelsbury village to examine the church. 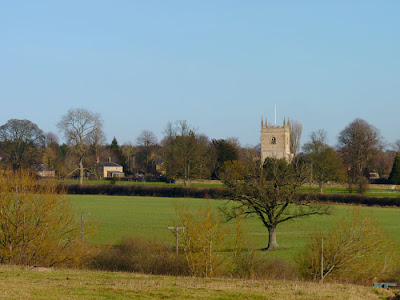 Sitting outside the village to share the customary thermos of hot chocolate, we could look across to our start point of Chadlington village and the distant tower of St Mary's church where we were parked. It seemed like a very long way off, though only 2-3 miles. 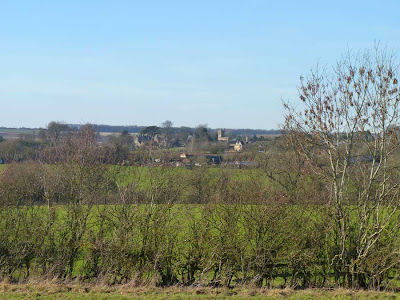 Spelsbury All Saint's church, hiding behind the many old yew trees which cluster in the grounds. 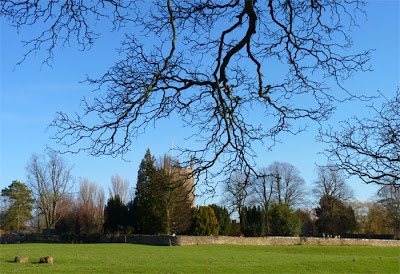 The church itself was pretty enough, not as old as some we've explored. The tower apparently is Norman in origin, though not obvious at first glance. 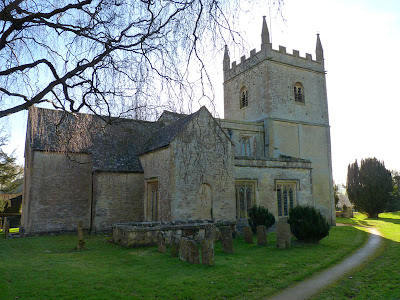 The plain doorway too is original Norman and looks as if it might have had side pillars once. 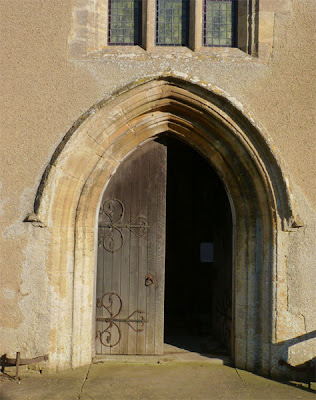 Inside some rather lovely stained glass panels forming an entrance hall - probably Victorian, I am guessing. 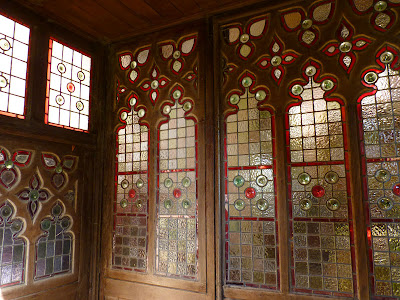 The church is undergoing some restoration and there was a stone mason at work, the quick, sharp tap-tap of his hammer and chisel echoing up the nave as it must have done through the centuries; little has changed in this old craft and it is probabl that a mason of the 13th century could, if transported to this moment in time, recognise his trade and tools and settle to work in the same fashion. 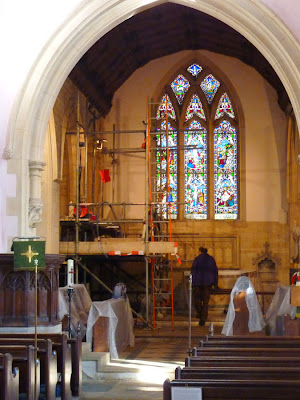 The interior is a little austere and plain. It's a church which has had much 'fiddling about with' in its life. Here you can just see the stained glass of the porchway beyond the pillars. 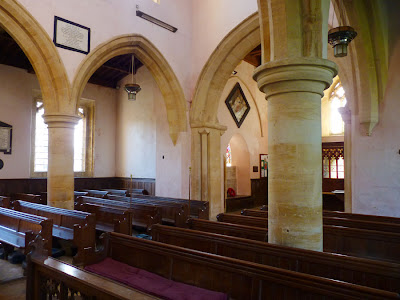 A little mosaic cross beneath the original font. 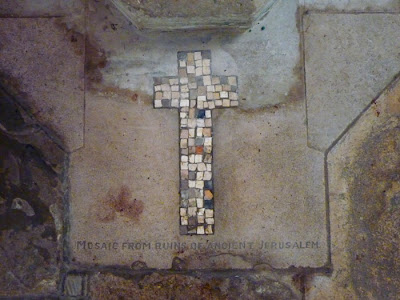 Glad to return to the sun, we explored the churchyard. John Wilmot, 2nd Earl of Rochester and a notorious 'Regency rake' is buried in a vault beneath the church. A celebrated wit and poet, he gained a reputation for many things including poetry which was frankly pornographic at times. I have found an excellent thesis about him here, but do be warned that some of his work, even though written a few hundred years ago, may still be offensive! 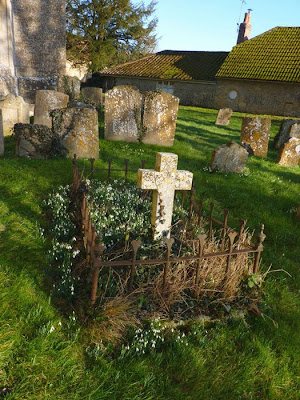 We began to turn the circle of our walk. A sweet little farm cat came mewling up to me, begging for attention and proceeded to follow me up the lane despite my ignoring her. However when I heard a van approaching at speed, I put my hand up to halt it and had to scoop the silly thing up as it was oblivious to the danger. Thankfully the driver must have been a cat lover and there were no nasty accidents that day. I popped her down and hastened away, despite her pathetic cries. 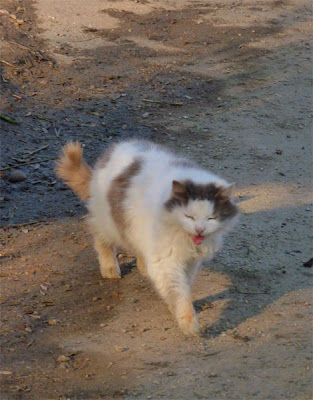 Unusual - and sad - to see a boarded up cottage in the Cotswolds, which is a prime property spot. 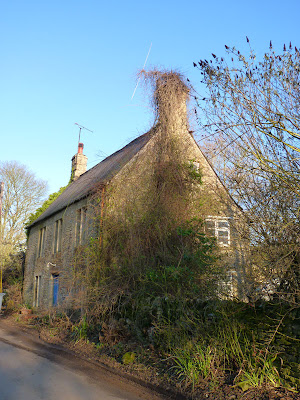 Past the grand and chilly Dean Manor. 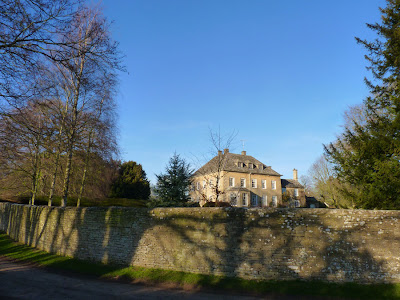 The afternoon sun was still pleasant but just beginning to catch an edge. Lambs are not out in the fields yet but there are plenty of fat sheep. 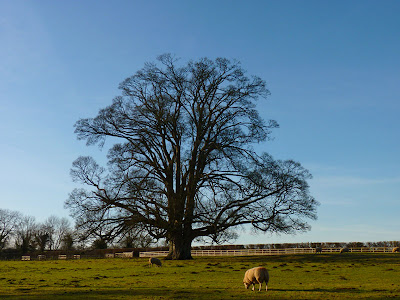 A final little adventure which I didn't photograph; a nasty encounter with three heavily pregnant cows who were stood right across the footpath. We were joined at the gate by a man and his dog, the dog being the object of the cow's displeasure - much bellowing and bridling as Andy tried to get past them. I hung back, not being a big fan of cattle at the best of times. The walker stood well away and encouraged me to go on, assuring me that they weren't interested in us, just his dog. I am still not sure how I plucked up the courage to go through them, especially when the lead cow started trotting belligerently up towards me. Death by cow is rare, but it does happen. Thankfully they left us alone once we were past and we hastened to the next field, crossing a pleasingly pastoral brook. 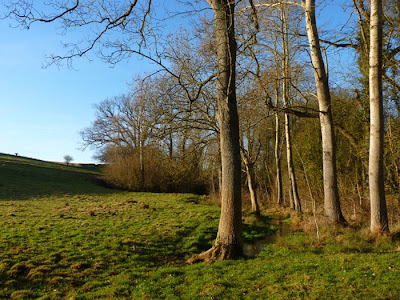 Soon after, we saw the walker and dog emerge from another route he had taken to avoid the cows. We began chatting as he caught up - not being a dog owner I have never seen cattle react like that. He then told me that he didn't want to tell me before, but his wife was once trampled by cows who repeatedly charged her, when walking their dog. (I am SO glad I didn't know that before!) Mercifully and with the aid of a superb surgeon, she survived, despite sustaining chest and collarbone injuries which normally cause death. Out of interest, I managed to find an old newspaper report about the incident. I think the next walk will be a nice sheep-filled one.
Posted by Gretel at 07:00

New comments are not allowed.

Gretel
Artist and crafter living deep in the beautiful countryside of Shropshire.

This is a Flickr badge showing items in a set called Malvern show 2008. Make your own badge here.